Slow Left Lane Driving and Why it’s so Dangerous 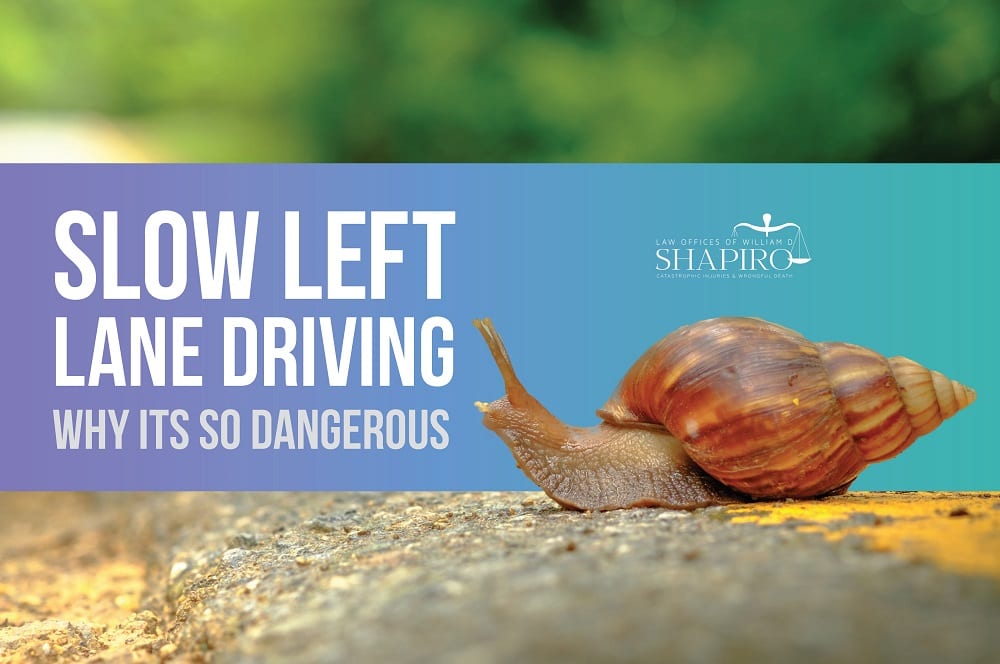 We’ve all been there. Whether on a tired cross-country road trip or your daily I-10 commute to work, you’ll occasionally be met with a sudden slowdown. And in this instance, you, of course, handle the unforeseen delay with joyful patience toward your fellow drivers- especially if the change in speed is caused by a slow driver in the left lane. Right?

Well, whether or not you find this instance frustrating, we’re here to affirm any annoyance you might feel. That’s because slow driving in the left lane is actually quite dangerous. Not only does it spark road rage and an overall lag in traffic flow, but it is also a significant cause for accidents. And in all 50 states, there is some kind of law that discourages slow left lane drivers.

Believe it or not, you can get in trouble for driving under the speed limit. In California, it is illegal for a left lane occupant to drive slower than those to the right of them. Take note however that if you’re driving upwards of 90 mph, you run the risk of getting pulled over as well. And if an individual is driving at the exact speed limit in the left lane, they have the right to remain there. This law exists because the left lane is intended for passing. And preserving its distinguished purpose will help traffic flow and prevent accidents. But how, you may wonder?

How slow left lane driving can cause traffic:

It takes just one slowpoke to ruin the flow of traffic for all drivers. And driving too slow in the left lane amplifies this domino effect. That’s because doing so will cause several lanes to be blocked and made unavailable for passing. So, when no one can pass these slower drivers, the entire flow of traffic will drop in speed.

How slow left lane driving can cause accidents:

While traffic may be a fear-inducing notion to you southern-Californians, accidents are far more threatening. And slow driving in the left lane can significantly increase one’s chances of causing a crash. According to research conducted at the University of Wisconsin Traffic Operations and Safety Lab, driving 5 mph slower than surrounding traffic is more likely to cause an accident than driving 5 mph faster. We do not suggest passing on that piece of information to your 16-year-old first-time driver, however.

In keeping safe on the road, make sure to consider which lane you choose. The California Driver Handbook suggests choosing the lane with the smoothest flow of traffic and ideally the middle lane. And if you want to use the left lane, be sure that doing is done purposefully, to pass other drivers. We at The Law Offices of William D. Shapiro aim to promote safety and protect those who are injured on the road. If you or a loved one has suffered in a traffic accident, please do not hesitate to reach out to us for expert legal guidance and counsel. We are your trusted local attorney, serving the San Bernardino area with years of experience and proven success. Call on us today!