The History of Personal Injury Law 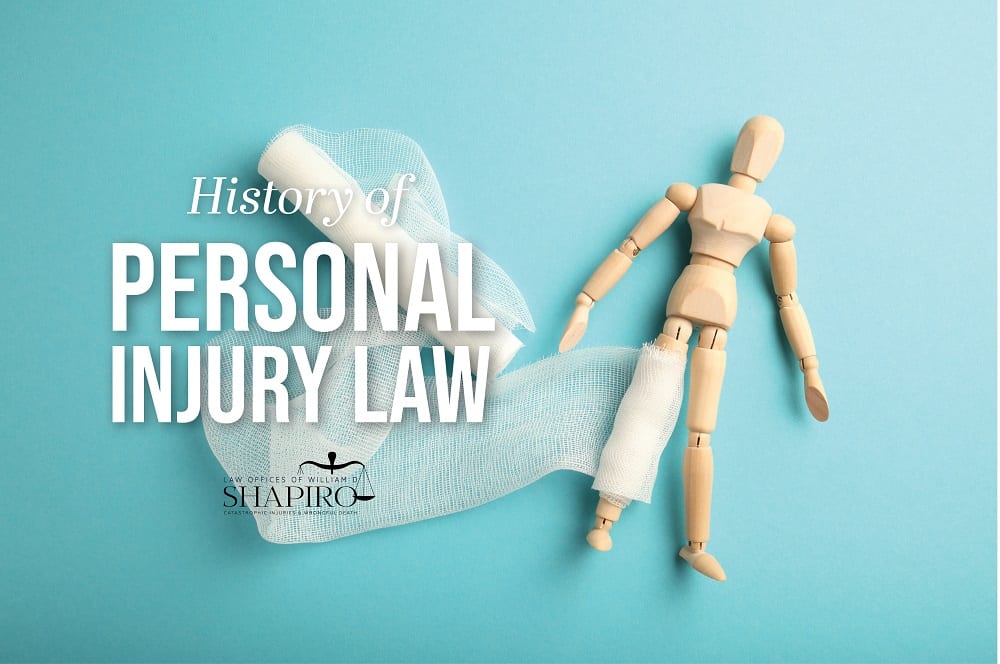 The practice of personal injury protection can date back to ancient times. After all, it is human nature to seek justice for wrongdoing. However, our modern interpretation of personal injury law has a much more recent history. It was not until the start of the 20th century in which this field was regularly practiced. Even the first TV ad for a personal injury lawyer did not debut until 1979. Imagine a world without these! And even now, this area of law is continually evolving to keep pace with cultural and societal changes. In this article, we’ll take a look at how personal injury law came about and how it’s developed over the past century.

With the US Industrial Revolution, those who once managed the farming fields moved to the cities for work. And with the influx of mining, railroad, and factory jobs came more frequent and more severe injuries. The dangerous nature of these occupations and their combination of long hours, child labor, dangerous machinery, and very little regulation, led to tens of thousands of deaths and even more injuries each year. These dangers and tragic consequences sparked a drive for change. Several groups, including journalists and unions, advocated for these workers. Thus, employees began to sue employers to recover their damages and gain justice for such unsafe working conditions. This prompted the 1913 National Safety Council, which aimed to uncover problems and to create solutions for employees. The rate of accidents consequently diminished.

In these early years of the 20th century, personal injury law underwent several advancements. In this era of the automobile came more accidents and injuries, giving rise to personal injury claims. The country saw a surge in lawsuits along with two significant cases that brought about two foundational concepts in personal injury.

1928: When Helen Palsgraf tried to board a moving train, two guard members attempted to help her when they assumed she was falling. However, their help caused her to drop the package of fireworks she was holding, and thus she was injured. Her lawsuit brought about the legal concept of proximate cause.

1932: Just a few years later, the Donoghue V. Stevenson case wherein the defendant fell ill after consuming a bottle of ginger beer that contained a dead snail, established the concept of negligence. The case set a standard of quality for manufacturers so to protect consumers from potential dangers.

In 1976, two lawyers listed their rates in a Phoenix newspaper. Doing go violated ethics laws and gave rise to the Bates V. State Bar of Arizona case, which made its way to the Supreme Court. The lawyers won the case, making way for the spread of legal advertisements in newspapers, on billboards and bus signs, and even on TV.

The last decade of the century began with the founding of the non-profit Association of Personal Injury Lawyers. This was established to enhance the services available to victims of negligence. And just a few years after came one of the most iconic cases of personal injury to date. In 1992, 79-year-old Stella Liebeck spilled a McDonald’s coffee on herself, resulting in 3rd-degree burns over six percent of her total body surface area and an eight-day stay in the hospital. In the wake of the accident, Liebeck brought a lawsuit against McDonald’s for $20,000. However, with the close of the case, she was awarded nearly three million in compensatory and punitive damages. Such high punitive damages drew angry attention and heated debate of whether or not it was justified. This personal injury case and the outrage it received is still discussed today.

With a fast-paced and high-tech culture, the law strives to keep up. New industries, gadgets, and trends have dramatically altered today’s legal landscape and the practice of personal injury law. However, despite such change, nor the circumstances we face, personal injury lawyers aim to protect individuals from harm. It is their mission to bring justice to all victims, from consumers to employees. And it is in this tradition that we at The Law Offices of William D. Shapiro hope to serve you. If you or a loved one require the counsel and advocacy of a personal injury lawyer, do not hesitate to reach out today. We are prepared to assist you in this challenging time with compassion and your best interest in mind.