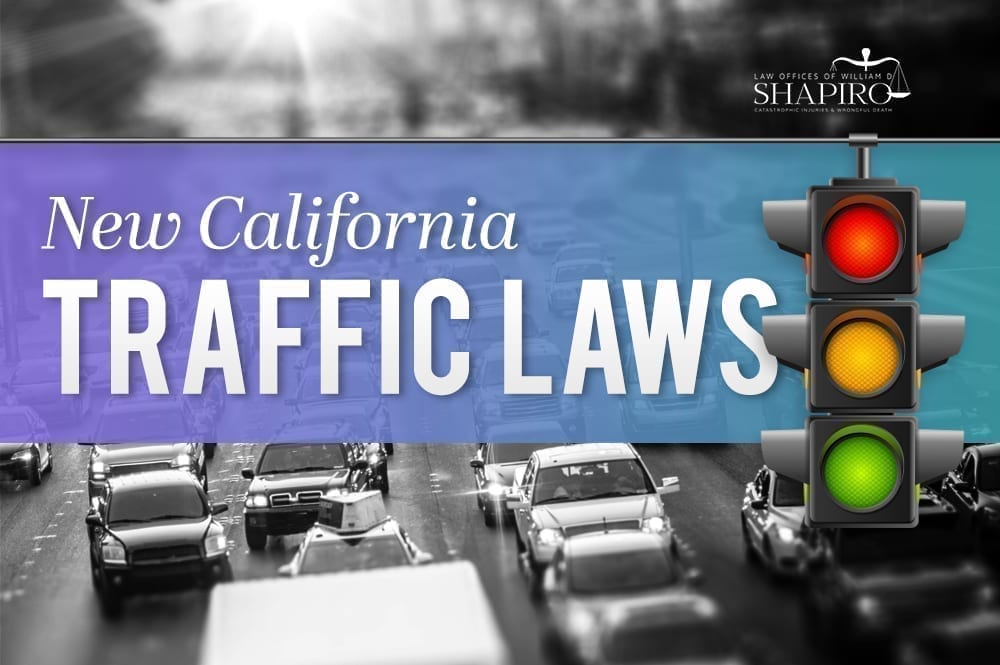 California drivers have been faced with new traffic laws this year that will affect the roads.

Beginning last month, some new traffic rules were added to California’s preexisting traffic laws to create safer roads for everyone. What a way to enter the new year!  The new laws were released mid December by the California Highway Patrol and were implemented on January 1st of this year with laws that extend beyond good Samaritans and cell phone usage.

Emergency vehicle safety. Drivers will now be required to slow down or change lanes when approaching stationary emergency vehicles with emergency lights, such as a tow truck or Cal trans vehicle,on local streets and roads. Until now, such slowing was only required on freeways. This law is designed to protect law enforcement officials or first responders who may be outside of their vehicles while responding to emergencies.

Unattended children. Bystanders and passersby will not face civil or criminal liability for damaging vehicles in order to remove unattended children, age 6 or younger, who are in immediate danger from heat, cold, lack of ventilation or other dangerous circumstances.

Distracted driving. Beginning July 1, driving while using a cell phone “in a handheld manner” will result in a point being added to a driver’s record. The penalty applies if the violation is the second to occur within 36 months of being convicted of the same offense. Four points within 12 months, six within 24 months or eight within 36 months could lead to a suspended license, according to the California Department of Motor Vehicles. The law pertains to anyone caught talking on the phone or texting while driving unless they’re using a hands-free device. Anyone under the age of 18 cannot use any devices while driving.

Emergency vehicle alerts. Authorized emergency vehicles will be allowed to use a “Hi-Lo” warning sound, which is different from a siren. It will be used to notify the public of an immediate need to evacuate an area for an emergency.

License plates for veterans. The California Department of Motor Vehicles also announced changes that will benefit veterans of the United States military. Beginning Jan. 1, eligible disabled veterans may verify eligibility for special or distinguishing license plates or a disabled person parking placard if they present certification from the California Department of Veterans Affairs or a county veterans services officer. Previously, the DMV only accepted certification from the United States Department of Veterans Affairs in the absence of a medical certificate.

The DMV also will waive applicable knowledge and driving skills tests required for a commercial driver’s license if the applicant is a current or former member of the United States Armed Forces licensed to drive large trucks. They need to qualify for the Troops to Trucks or Military Even Exchange program.

IN — Indiana’s hands-free law showing results: Starting July 1st, points can be assessed against licenses. Indiana law enforcement agencies were directed to emphasize education and enforcement to gain compliance in the early months of the law. However, under the law, points against drivers’ license can be assessed starting in July 2021.

Sgt. Matt Ames of the Indiana State Police said troopers are talking to offending motorists about pairing their cell phone to their car for hands-free use if needed. In newer cars with Bluetooth technology built in, cell phones can be linked to voice controls. Devices can also be plugged in via auxiliary cables, earpieces or other devices that allow hands-free communications. Or a driver can just turn off the phone and drive.

The same law applies to all electronic hand-held devices that can take a driver’s attention away from the act of driving, such as tablets and smart-watches when used for texting or checking email.

NY — 2020 seat belt law helped boost New York from ‘yellow’ to ‘green’ rating in highway safety report. Following the passage of Senate Bill 4336/Assembly Bill 6163 in 2020, New York received “green,” the highest rating, in the 18th annual Roadmap of State Highway Safety Laws report, which Advocates for Highway and Auto Safety released this month. The law extends the mandate that all vehicle passengers 16 and older wear a seat belt from solely applying to front seat passengers to applying to all passengers.

This legislative session, New York lawmakers are also considering lowering the blood alcohol content (BAC) levels allowed by law while driving to 0.05 (S131), expanding use of speed cameras in a school speed zone of New York City (FURIOUS Act), and requiring children younger than 13 to sit buckled in a rear seat (S440/A1086).

Advocates also urges New York to postpone issuing unrestricted licenses until age 18, prohibit cell phone use in the graduated drivers licensing program except in case of emergencies and require children to use a booster seat until they are 8 years old and 57 inches tall.

NJ — Highway safety advocacy group urges New Jersey to strengthen seat belt laws. New Jersey missed the top rating on the Advocates for Highway and Auto Safety’s latest state-by-state safety report, which was released this month, for just one reason: its limited enforcement of adults wearing their seat belts in the rear seat. Currently, law enforcement officials can’t issue tickets if they just see an adult not wearing a seat belt in the rear seat. Primary enforcement would allow them to do that.

State legislators are considering several other vehicle safety bills this session, including A855, which would prohibit drivers from viewing video streaming and videoconferencing behind the wheel, regardless of who is holding the phone.

Another distracted driving bill this session, SB-1602, would prohibit use of devices while drivers stopped at traffic lights or stop signs. Drivers who look at their phones just during the pause in driving may remain distracted for several seconds while they continue on their route, she said.

Starting on Jan. 15, a 44-day warning period will begin for those caught speeding between 6 and 10 miles per hour over the speed limit. Those drivers will receive a warning by mail.

FL — Traffic laws enforced near UF campus to boost safety in wake of recent deaths. As a result of the recent deaths of two University of Florida students in crashes on University Avenue by campus, the Gainesville Police Department utilized officers on motorcycles and in cars to conduct a traffic enforcement operation on University Avenue. Several other recent accidents elsewhere in Gainesville have killed or injured pedestrians and bicyclists.

NH — Highway safety advocacy group urges New Hampshire to require adults to use seat belts. New Hampshire is the only state in the U.S. that does not require adults to wear seat belts, and that policy decision kept it at the lowest level rating in the Advocates for Highway and Auto Safety’s latest state-by-state safety report, which the organization released this month.

This session, legislators are considering HB251, which would require children younger than 2 to ride in a rear facing car seat until they are at least 40 inches tall and weigh at least 40 pounds. Advocates also encourages the state to enact an “all-rider” motorcycle helmet law, a booster seat law and more restrictive requirements for its graduated driving license program.

MI — Here’s how Michigan’s expungement laws will change this spring. Yes, this has something to do with motorists. Big changes are ahead for people who want to get their criminal records sealed from public view in Michigan. New laws that take effect this spring will expand the number and types of convictions that qualify for expungement. One of the key changes to expungement by application include expanding eligibility to most traffic offenses. This excludes convictions for driving while intoxicated, traffic offenses that cause injury or death, and Commercial Driver License violations.

The changes to expungement via the application process will take effect on April 11. These laws apply to the petition process, which is when someone asks the court for an expungement and the decision is made by a judge. Michigan is also creating a system to automatically expunge eligible felonies and misdemeanors after certain periods of time. This bill had a two-year implementation period, meaning the earliest that automatic expungement will take effect is Dec. 30, 2022, according to Safe & Just Michigan.